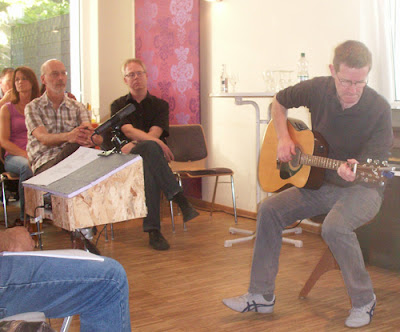 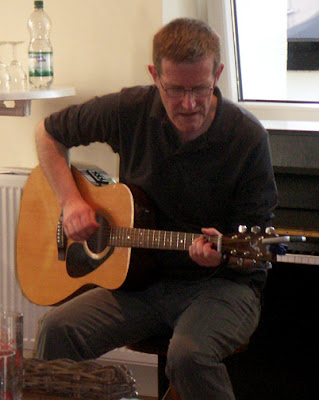 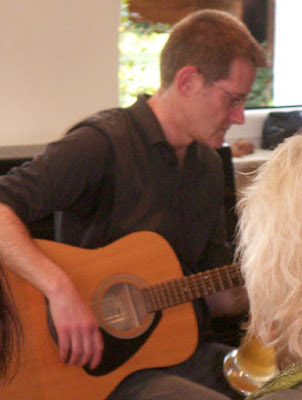 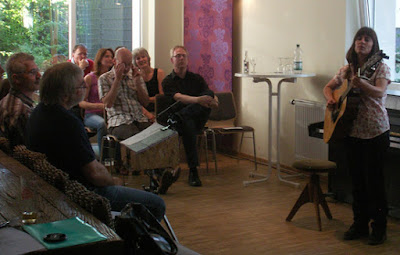 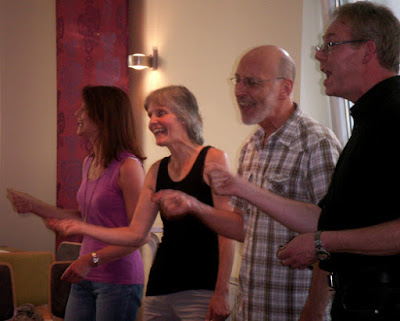 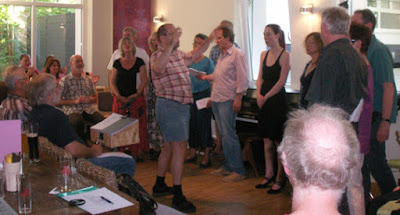 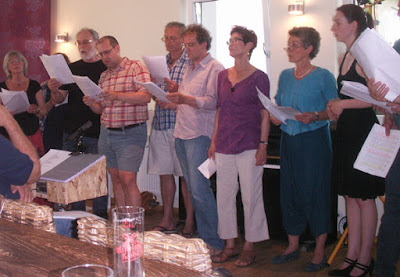 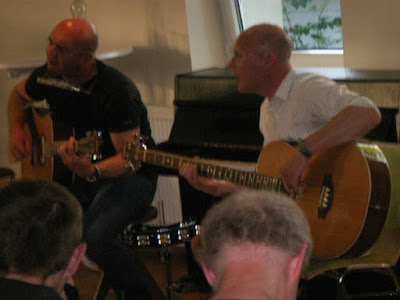 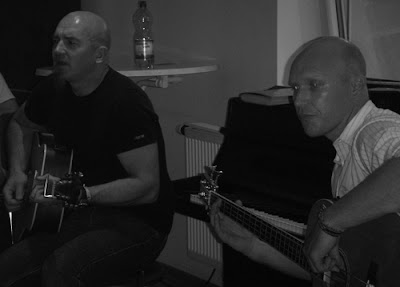 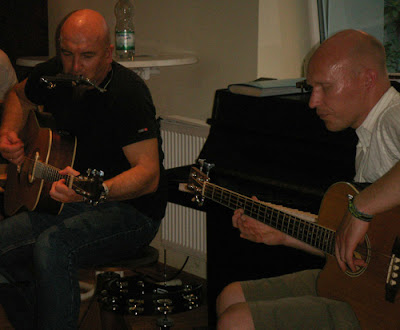 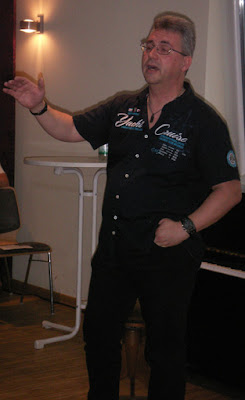 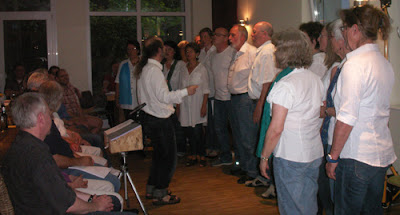 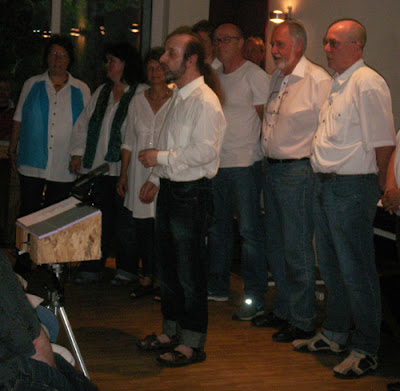 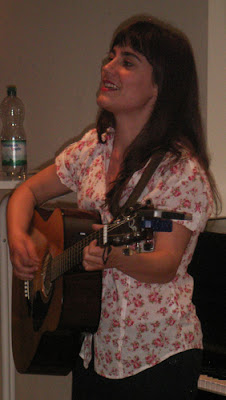 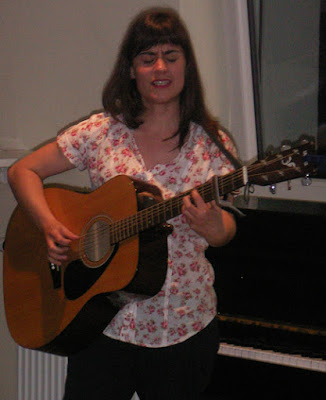 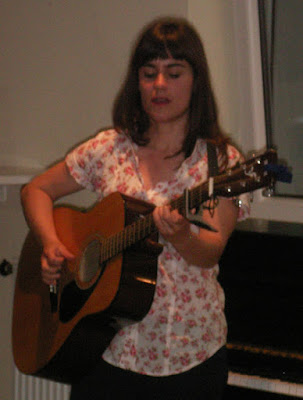 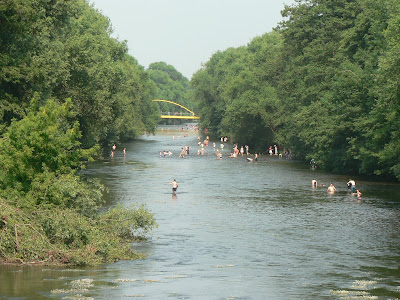 I have something to confess. I skipped Folk Club in July. Not because I was sick or at a business meeting or anything like that. No, I was just plain unfaithful and went to the "Tanz- und Folkfest" (TFF) in Rudolstadt. Every first weekend in July this little city (about the size of Bad Honnef) near Weimar in Thüringen is host to about 100 top drawer Folk Music groups from all over the world and about 80,000 visitors. Okay, so they count the visitors all over again on each of the 3 days, and many people are counted 2 or 3 times, but still, we are talking about roughly 100 Folk Clubs every day! The entire downtown section plus a park about half the size of the Rheinaue was cordonned off and 3 full-sized stages were set up: one in the market square downtown and two in the park plus a smaller one at the Heidegsburg overlooking the city. In addition, the municipal theatre and many other public buildings including the library where Goethe and Schiller may have trod the boards, the church and the Heidegsburg itself were commandeered, and there were street musicians are on every corner. It was a real, peaceful Folkie invasion. The clothes, the age group from kids to Rollator grannys,  the hairstyles from knee-length dreadlocks to bowling-ball-and-beard, and smiles, that if you put them end to end would have embraced the world. The whole hootenanny atmosphere reminded me so much of the 70s I thought I had entered a time machine. 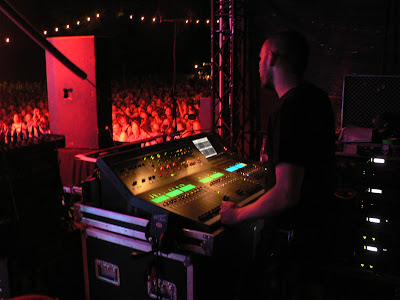 There is just one word to describe this spectacle: overwhelming. I was contact person for 3 groups (one from the Cape Verde Islands (Hmm, now just where is Cape Verde?), one from Argentina and adjacent countries and one from England, so I got to see much of the festival from backstage. I was impressed not only by the professionalism of the groups and how down-to-earth and friendly these upper-end performers were, but also by the superb organisation. The musicians and their instruments were met at major airports such as Frankfurt and Berlin and brought to Rudolstadt, where they were ferried by van back and forth between their venues and their hotels. And this just scratches the surface: scheduling, brochures, performer accommodation, decoration, cafeteria for performers and staff, festival security, medical support...... Everything went like clockwork.

Each year a country, a dance and an instrument are are featured. This year the country was Norway and the dance was also Norwegian but the instrument was not the 7-stringed Norwegian Hardanger fiddle, but instead, the Waldzither. Just the instrument I have been trying to learn to play for the past year! Right up my alley. Needless to say, when I was not tending to my groups;I was getting inspired by enjoying the wonderful music that professionals can coax from this and related instruments such as the Portuguese (fado) guitar or the Irish bouzouki. 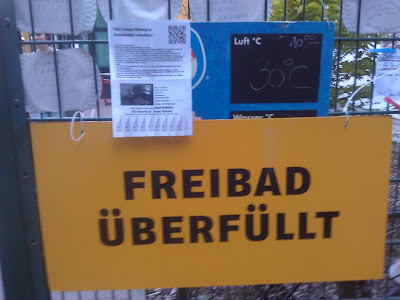 I tented near the outdoor pool, which turned out to be a very good idea with temperatures soaring to 35°C in the shade, only there was no shade. And to make matters worse for the performers, 2 of the 3 major stages faced the afternoon sun, meaning that the temperature on stage was at least 10° hotter. My African performers had to cut their performance a bit short due to their manager's concern about their health. Don't ask me how the Norwegians, who were the next ones up, survived. I was in the swimming pool.

It took me about a week to recover, get re-hydrated and stop dreaming that my group is supposed to perform somewhere but I don't know where. The TFF is celebrating its 25th anniversary this year and I just ask myself where I have been the past 24 years. 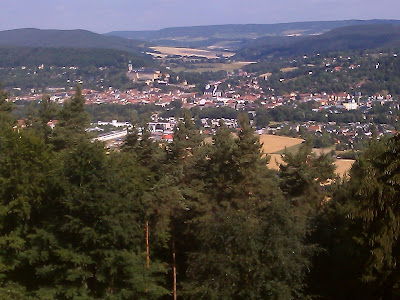