A long time ago Plato once said that “music is a moral law. It gives soul to the universe, wings to the mind, flight to the imagination, and charm and gaiety to life and to everything”. It is so. 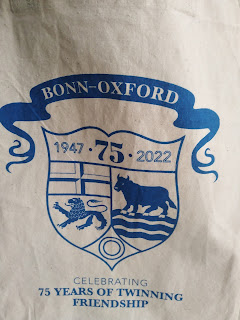 So, we are hosting an extraordinary folk club meet, unusually on the LAST Friday in August on 26.08.22 in celebration of the diamond 75th  jubilee of the city twinning between Oxford and Bonn, which originally took place in 1947 just after the cessation of hostilities after WW II.  Bonn Folk Club already sent a small delegation to Oxford in June to celebrate and you can see a small docu film here on YouTube:

For most people living on continental Europe, twinning arrangements in particular and the EEC/EU in general represent greater understanding and prosperity and a lessened chance of war, now sadly occurring once more on European soil. With war currently raging in eastern Europe, what better time to reflect just how lucky we are in western Europe, despite corona and looming gas shortages, to be a small piece of a much greater relatively peaceful community.

Where will it be in Bonn?

Folk Club Bonn is situated almost equidistant between Bonn and Bad Godesberg and if you are travelling by tram / U Bahn the Ollenauerstrasse is the station to alight at, then walk due west and cross the railway lines and turn into the next road on the right and we are on the first floor of the building you see opposite you. By normal DB railway, alight at Bonn UN Campus and a short walk in a southerly direction will bring you to the railway crossing mentioned above when travelling from the Ollenauerstrasse.

Dotty's Sports Bar is situated on the first floor of the Bonn hockey and tennis sports complex.

So what will be in store for you?

If COVID-19 incidence rates behave themselves than we will have our old fashioned indoor meeting, without amplification and totally unplugged. There will be no restrictions on who can attend and it will not be necessary to pre-register in advance in order to attend. There will be no mandatory wearing of nose and face masks, but for those of you who actually feel safer and happier doing so, then it is fine for you to do so. Regular fresh ventilation will be provided by our very own Eleanor, so there may not only be beer on draught! There will also be a periodic most welcome refreshing breeze

Apart from the usual folk club Bonn regulars, none other that Tom Kannmacher will be the featured artist on his lute. Tom is one of Germany’s most talented aficionados of traditional German folk music. Furthermore, Barry L. Roshto will be on hand with some stunning musical and spoken word presentations for your perusal and enjoyment.

For anybody who can prove that they are residents of Oxford the entrance will be free and they will also have the opportunity to perform a floor spot of 2-3 songs.

On the following day on Saturday 27.08.22 there will be a Bürgerfest in Bonn centre near the Sterntor, and Bonn folk club will be performing from 12:10 hrs until 12:40 hrs. There will be lots of other attractions on the day including the elusive Oxford Morris Men dancing troop. Do come along, it's outdoors and free. 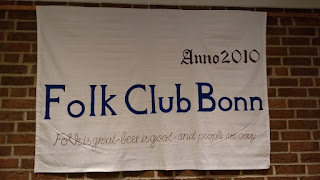 had arms of thyme

but it was Rosemary

Keep smiling, stay safe and look after one another, the chances are that nobody else will unless you do!

Sugar,
I was so busy in June that I almost forgot this particular link, one of Mike Harding’s best ever, in my humble opinion.
For those of you not in the know Mike Harding, an ex BBC employee and BBC Radio 2 Folk DJ, sacked almost disgracefully, for sheer ageism, but who confidently grasped the nettle of the current media age and fought back quietly, confidently and regardless. He is linked onto this site of Folk Club Bonn, because he certainly deserves it. I mistakenly thought that I perhaps know a bit, but Mike Harding, manages, quite rightly to place and order things in their very most rightful places, from a folk point of view. Probably more so than any other living mortal on this unique planet, that we coolly call earth.
This particular podcast is a classic case in point:
Mike Harding Podcast #305
Updated on date June 8, 2022
https://mikehardingfolkshow.com/podcast-305/
(Should this link perhaps not work due to upgrades on the site, simply copy and paste it into a new browser window.)
Just over two hours of folk, roots and accoustic music at its very best, brought to you by Mike Harding, from a stone shed in the Yorkshire Dales.
Andy Irvine & Paul Brady are true stalwarts of Irish traditional folk music, but while respecting the „tradition“, neither have shied away from innovation in their own rights. Andy Irvine initially cut his spurs on the mandoline, before moving on to the bouzooki, both Greek and Irish varieties, and the mandola, and was instrumental in inventing the gouzouki an instrument strung like a bouzouki, but with the body shape and sound volume of a large „jumbo“ guitar. Andy is also a fine harmonica player and a living encyclopedia on the legend of all folk legends, Woody Guthrie, a couple of whose songs you will hear later on in this podcast. Paul Brady was also an innovator as well as a gatekeeper of the tradition, and he often borrowed open G tunings on the guitar used in classic Delta Blues and used these tunings extremely effectively in his own songs such as „Arthur Mcbride“ and infused these old Blues tunings seamlessly into mainstream Irish folk music.
The two of them playing together on this recording of the „Plains Of Kildare“ which was originally recorded in 1975, before being recently re-mastered, and this is a brief musical dissection of this song from Wikipedia:
QUOTE
Irvine opens the album with his arrangement of "Plains of Kildare":   an instrumental intro in 6/8 time (jig) leads into the song, which is in 3/4 time for the first six verses until an elegant transition switches to an instrumental middle eight played in the Bulgarian rachenitsa rhythm of 7/8 time (2–2–3) which aptly suggests the gallop of racing horses, then back in 3/4, as the horses slow down for the final verse prior to the finale, again in 6/8. Irvine adapted the lyrics based on earlier versions from Eddie Butcher and A.L. Lloyd, while also using additional sources supplied by Frank Harte.
UNQUOTE
Quite! When the going gets hot, and the money’s on, not only „Stewball“ but Andy Irvine is also a genious! Also if you have to hear some nice violin towards the end of this wonderful modern remastering of an „old“ recording of the „Plains Of Kildare“, is none other than master fiddler Kevin Burke, one of the finest living Irish fiddlers.
The actual song itself deals with a horse in the mid 18th century named „Stewball“ a very real, although also very rare, as it could speak and discourse inteligently with its rider, a horse which had previously raced extensively in England and was sent to Ireland around that time. It was challenged by a local hero of a horse named the „Monaghan Grey Mare“ which was beaten unceremoniously by Stewball, the better of the two horses on the day, when a lot of money changed hands, with many locals in Ireland cursing the Monaghan Grey Mare.
On the second song one can almost smell the fisherman’s bait if one closes one’s eyes. „The Fish Gutters‘ Song“ aka „Come All Ye Fisher Lassies“ was written by none aother than Ewan MacColl, but like many of his songs is now regarded as „traditional“ already. It was in fact written in the 1960s for the BBC programme series „The Radio Ballads“ which Ewan produced. This is a particulary inspiring version played by young Anglo-Scottish folkers Janice Burns and Jon Doran from the North East of England and delights in both Janice’s singing and the interplay of her mandoline with Jon’s bouzouki. Wonderful, simple folk musical eloquence!  Check this duo out again with „Glasgow Peggy“  on track 22 towards the end of this podcast.
There are many songs which are true gems on this podcast, but the next one that has particular significance for me is „The Chemical Workers‘ Song „ from Ron Angel, written in 1964 about I.C.I. in Billingham on Teeside. 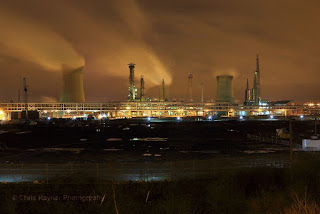 6 The Hartlepool Monkey – The Teesside Fettlers – Travelling The Tees

9 What Kind Of An Eegit Are Ya? – John Devine – Notions

14 The Witch Of The Westmorelands – Linda Adams – Nobody But Me

20 The Well Below The Valley – Pauline Scanlon – The Unquiet

please do not turn up this evening as we will not be there. During these strange corona times many things have become topsy-turvy but despite this, or perhaps because of this disorder we are reverting to the traditional August vacation break at Bonn Folk Club. So there will be no meeting tonight on Friday 05.08.22.

So Folk Club Bonn really is taking its scheduled vacation in August, but not quite this year. As you have already read 2022 is the 75th jubilee of the Bonn-Oxford twinning arrangement and this year the folk club visited Oxford in June. In August people from Oxford are coming to Bonn to celebrate this event and thus the folk club is arranging an extraordinary event on the LAST Friday in August, on Friday 26.08.22 with Tom Kannmacher as featured artist. Sir Isaac Newton, the famous English mathematician and physicist, once wisely, but sadly, observed that „men build too many walls and not enough bridges“ which is as true today as when it was written over 300 years ago. The numerous twinning arrangements around the world certainly help for there to be more understanding in the world as a whole so the folk club is happy to play a small part in this. In addition to this extraordinary folk club event on Friday evening on the 26.08.22 to celebrate the Bonn-Oxford city partnership the folk club will also be making an appearance the following afternoon on Saturday 27.08.22 at the Bürgerfest / Civic Festival event at the Bottlerplatz in the centre of Bonn near the Strerntor.

And of course, normal service will be resumed shortly afterwards as the next official Folkclub will take place on the first Friday in September 02.09.22 so – as Mario would say, „out of the bedroom and into the music.“

Good evening Ladies and Gentlemen. My name is Mario and John and I are back again from Oxford. We want to tell you some true stories from there….., so hätte der Folkclub 125 anfangen können, aber er begann wie üblich mit John Schlachtruf „Laaaadddieees and Genmtlemen……“ 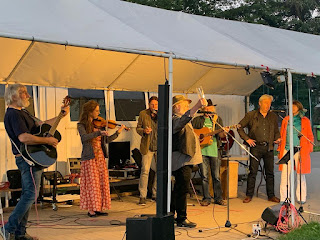