A Travel Report from Steve

FCB visits a fado folk club “A Tasca do Chico,” in Lisbon

It looks like the entrance to any apartment building in Lisbon's Bairro Alto except for the modest "A Tasca do Chico" sign above the door. I edge into the dimly lit bar and take a seat on one of the stools that clutter the passage: the fifth and sixth places at rustic tables that are meant to seat four. It is 9pm and although the music is not due to start til 9:30 the place is already pretty full.

The Spanish couple at the table inform me "Va a empezar en seguida," Meaning that "it" will start straight away. I am surprised that the music will start so soon, partly because there are no musicians in sight. Then it turns out that he was talking about a soccer game on the big-screen TV. Uncertain now if I might have ventured into a sports locality by mistake, I make my way to the bar and ask if the music starts when the game is over. "Não senhor, apagamos às 9:30." So they shut it off, just like that, at 9:30. I order my snacks (petiscos) of delicious Parmesan-like “queijo seco” and baguette and some "vinho branco," the house white wine, and head back to the stool that my new Spanish friends were kind enough to save for me. People are still wandering in.

Eyes now accustomed to the semidarkness, I notice two stools against the wall near the bar, with a 12-stringed, mandola-like Portuguese guitar and a normal guitar (which I later find out is called a "viola") hanging above them. 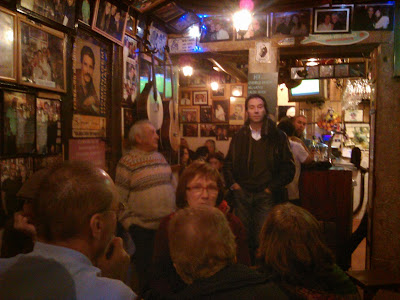 The Belgian couple that occupies the other half of my table have now reappeared. Promptly at 9:30 not only the TV goes off but the entire bar plunges into darkness broken only by candle-strength electric lanterns hung from the ceiling. A portly, mustached gentleman supporting himself on the end of the bar introduces the virtually invisible musicians, a father-son team (the son is just called "junior") and melancholic tones pour out of the darkness. Then it is the portly gentleman's turn to sing in plaintive tones bordering on tears about the fado and Lisbon, lyrics common to many fado songs. He has a floor spot of 3 songs like in the Folk Club Bonn. When the dim lights--which now seem sun bright--go back on, I use the break to quiz the Portuguese guitar player about the instrument. The lower 3 metal string pairs are D, A and B tuned in octaves as on a 12-stringed guitar and the upper 3 string pairs, E, A and B, are simply doubled as on a mandolin. This instrument usually plays moody arabesques around the sung melody by being strummed or picked using finger picks attached only to the thumb and index finger, although it sometimes sounds like all the fingers are being used, while the “viola” keeps a solid beat. To my question how long he has been playing, the artist just laughs and says "sempre, " for ever. Actually he was probably laughing at the naïve question, because every Portuguese person knows that you don't play this instrument: it is more like a love affair. The Portuguese guitar, which actually belongs to the cittern family of instruments like the German Waldzither, can also be used as a melody instrument, in which case the player alternates between parts of the melody and embellishments.

After the break a very Portuguese looking young woman comes on and throws herself with such heartbreaking passion ("saudade") into her songs that her rich alto voice brings tears to my eyes although I cannot understand a single word. After the second break comes an even more gorgeous young woman, her good looks perhaps aided by the dim light and an atmosphere so warm and positive you could cut it with a knife. Who knows?

Then the gentleman is up again. It turns out that he is a regular performer, sort of like our John, but the musicians and the female vocalists are not. As in our Folk Club, there is no cover charge, only the gentleman selling CDs that feature himself 10 years younger. Of course I buy one and leave a couple of FCB cards but I kind of doubt that we will be seeing these performers in Bonn.

If you are ever in Lisbon, though, check out "A Tasca do Chico" at one of its two locations: Rua Diário de Notícias 39, Bairro Alto or Rua de Remédios 83, in the Alfama district where the fado was born and is only a stone's throw from the fado museum, Museu do Fado. But you should inquire ahead of time if they have performances when you want to go: the first locality, for example, does not have performances on Fridays and Saturdays.