First the glad tidings.
It was a wonderful surprise to find a large white envelope lying poste restante for the Folk Club at House Müllestumpe. It had a beautiful Swiss postage stamp with a robin on it (any philatelists amongst you may apply!) and wished us all at the folk club a peaceful Advent season and a successful New Year. 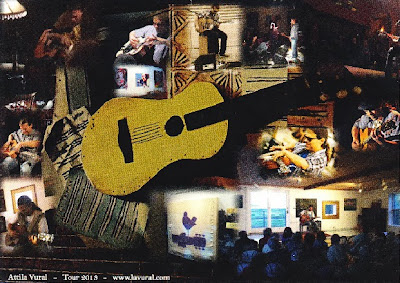 We certainly reciprocate and wish Attila Vural, who was our esteemed „Special Guest“ in November at FCB No 42, a very successful musical New Year in 2014. For those of you who attended in November a description of Attila’s guitar skills is as necessary as saying that a nightingale sings well! For those of you who missed his performance, here is a video of his encore at FCB 42 with him premiering a new piece „Message to Barjac“
http://www.youtube.com/watch?v=GI_d1Q7EHRI 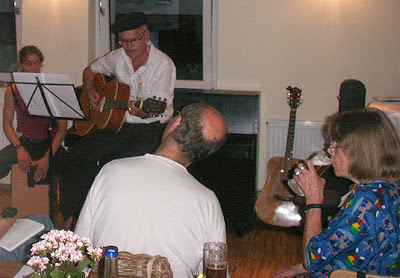 The sad tidings are also somewhat related to FCB 42 in November. More often than not, whenever I’ve opened the evening at the Bonn folk club I’ve had the pleasure of seeing in the front row the comforting and familiar sight of a somewhat diminutive lady with a gigantic smile, a sweet soul and a heart of gold. Verena Obst was a regular guest at the folk club as well as being a great jazz fan. (I can’t remember ever attending a jazz concert in or around Bonn without bumping into Verena there.) Verena, as was her kind nature also helped to make life less burdensome for another guest at the folk club who has more trouble than most, getting to and coming from and indeed physically attending, and often playing at folk club evenings, Andreas Gruner. Such a kind-hearted woman was Verena. She was also very unassuming and upon winning in a raffle at FCB 35 the chance to open the next folk club she blushingly declined, not because she lacked the talent to welcome everybody in three languages, but because she thought she lacked the volume of voice.

She bid us farewell in November and said that she was undertaking a four week tour of Africa in December and would not be attending the December folk club, but would see us again in the new year. Unfortunately Verena suffered a brain haemorrage whilst in Africa and died the following day in hospital there.

Our thoughts and sincere sympathy go out to her family and friends, of which there were many, and we are deeply saddened at the loss of such a wonderful human being with such a great love of music.