A little bit of Folk and Blues in Königswinter

Two men born a thousand miles apart in Burton-upon-Trent in England and Trento in Italy and now meeting at the halfway house in a small town in Germany in Bonn  for a musical history of acoustic rural folk blues music from the Mississippi Delta to Chicago and the piedmont blues from Carolina to New York. An unplugged ramble through the deepest darkest roots of what we now know as "popular" or "pop" music.

The Blues, are sometimes wrongly considered primitive, but they are in truth the often crying and wailing, intricate poetic soul and rhythm of Africa, made and crafted in the USA. The Blues, as a defined musical art form are little more than a century old, but the hopes and fears and trials and tribulations and inevitable hardship and occasional elation of everyday life which they describe and so powerfully embody have accompanied all of humanity on life's long  journey ever since the first humans stood up so very long ago and walked out of Africa and into the unknown, in search of something. Some of the later travellers from Africa were even given a free ship's passage to the promised land and a lifetime's guarantee of full employment with full board and lodgings for their part in the human chain of history. The Blues are their collective voice. As Big Bill Broonzy once said, "All music is folk music, I never heard no horses sing a song!"

Come along and listen: 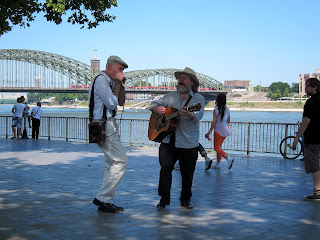