John Hurd was back amongst us and gifted us this photo of Simon Kempston at the end of the evening, just after Jock Stewart, a song about another famous Scotsman, had been sung: 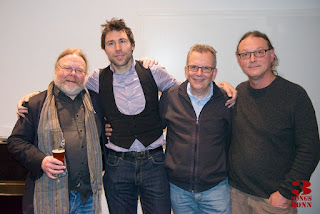 No wonder Simon calls us "The best folk club outside of Scotland", a high accolade indeed. Simon has played at most of the other folk clubs and he certainly holds a Folk Club Bonn record by having guested here no less than seven times. He even has seven different CDs of his own work to show for it.
Simon was first attracted to Folk Club Bonn in 2011, in our second year of existence, led along his path by Barry's shining light initiated by the folk club blog, the thing that you are currently reading now, which Barry L. Roshto created as a Rolls Royce of an internet presence for a Morris Minor of a provincial European folk club based in a small town in Germany.

This December John Hurd with his 3SongsBonn English language musical website also wrote a review of the evening accompanied by his usual collection of stunning photos: