Mr. Barry L. Roshto certainly did us all proud taking us on a resplendent musical journey through his Louisiana homeland with personally hand-picked musicians accompanying us on every stagecoach of the journey. Filling the room with delightful melodies, string quartets, Louisiana marching bands, freshly tuned piano, prides of guitars and barking blues harps and drums galore and even, low and behold,  a sousaphone! 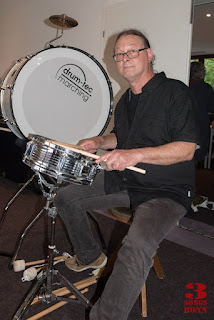 
What a roller coaster ride that was!

The June FCB # 92 was a thoroughly great evening with Special Guests from Northern Ireland gracing us with a visit again, but it was also Barry’s secret Birthday Bash, and I think we all did quite a good job of keeping it a „secret“ on the night. Barry, is a wonderful musician and co-founder and co-resident musician at FCB and is also our resident webmaster and quietly set up this blog/webpage on 05.03.2010. The observant ones amongst you may have just realised that we very recently passed 200k, yes 200,000 clicks! Barry doesn’t really like „fusses“ though, and especially not concerning webpage clicks.

Barry, apart from being a magnificent musician, is also a media artist and a mathematician and ticks (and clicks) a little bit differently than most of the rest of us mere mortals.

So from the very beginning  instead of 50,000 clicks, it was actually 64,000 clicks that Barry had set his sights on and was hoping to celebrate as the first landmark. This was way way back in 2014

Steve and I managed to actually deliver 64 predominantly different bottles of German wheat beer to his door, in order for him to celebrate. That was no mean feat outside of Bavaria and speaks volumes for the quality of Bonn’s beer off licences!

We missed the 100 k clicks of course, because Barry wasn’t recognising it, but we thought again for 2 to the 6th clicks = 128,000 clicks. As the clicks on the FCB blog were coming faster and more furious we hardly spoke together. The 100k clicks were a warning siren.

Finally at 128 k, in order to avert impending financial ruin, we became more adventurous and ingenious. We filled 3 American style brown paper bags as follows and marked them with Roman numerals:

Aligning the three brown paper bags correctly, meant that they read not I II VIII but now suddenly 128! Thus we managed to get away with a total of only eleven bottles of wheat beer instead of 128 bottles!

Now that we have very recently passed the 200 k clicks mark we know that as 2 to the 7th fast approaches us, 256 k or 256,000 clicks is only just over the horizon. If any of you great minds out there have a flash of inspiration as to how to best handle this upcoming dilemma in an ingenious way, befitting our illustrious webmaster, we would be more than grateful to hear from you.

The lucky winner will not only receive free entrance to the next folk club, but also a complementary floor spot in 2019!