A man who played several times at Bonn folk club and who sadly passed away last year,
would have normally been celebrating his birthday today.
His daughter Roxanne who now lives in London and is a distinguished singer/songwriter in her own right has organised a tribute concert on FaceBook for her father. If you follow the link below you can link to the stream beginning 17:00 hrs CET in Germany
https://www.facebook.com/Richarddebastion/photos/a.371521436213179/3361494063882553/?type=3&theater

Enjoy.
For those of who did participate many will have realised that when many different people watch a live stream with many different internet connections simultaneously there is often some unexpected outages and a general reduction of sound quality. It really was a wonderful idea of Roxanne de Bastion to arrange this belated birthday party for her late father Richard de Bastion. She managed to put together a wonderful musical collage of interpretations from many of Richard's friends from along his long and illustrious musical career. Now Roxanne has followed through and put all the musical inputs from the evening onto a separate YouTube channel in Richard's name so that you can now re-listen to it at leisure, or listen to it for the first time, in much better sound quality than the original live stream:
https://www.youtube.com/playlist?list=PLo_f1s754R8IFwHh6cHqjw3YijFiKltyj
There is a contribution from Folk Club Bonn included which was organised by Daniel Bongart and recorded at Lothar Prünte's now sadly deceased live music venue his "Hinterzimmer" in Bad Godesberg, at which many Folk Clubbers have performed in previous, somewhat happier years. Thanks, Lothar for allowing us to be some of the last people to tread these hallowed boards one last time in order to produce these recordings to celebrate Richard de Bastion's posthumous Birthday. Special thanks to you Roxanne and we hope to see you sometime in the future when times are better, and simply more normal, as a featured artist in Folk Club Bonn. Pencil us in for 2021 and let us know when you plan to tour Germany.
Many of you may have been scratching your heads wondering what this painting by Salvador Dalí of "Swans Reflecting Elephants" has been doing here. The art historians amongst you will be aware that this was a very significant painting, and I admit to rather liking it. Dalí, the Catalonian surrealist painter, he with the proud eccentric flamboyant moustache, painted it in 1937 and he was famous for creating double images in his paintings. 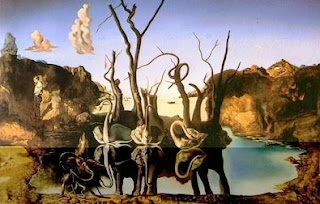 Swans Reflecting Elephants
Dalí's double images were within the same genre of art, painting. Richard de Bastion's song "Bully The Kid" was a work of even greater genius in that the reflected double images in this song transcend three different genres of art. Initially, the Hollywood western movie "Shane"  from 1953 showing the struggle between the new U.S. homesteaders and the old cattlemen on the open range. Jack Palance plays the "bully" Jack Wilson a gunslinger hired by the ranchers as a "legal killer" under the frontier law. Bill Hicks, arguable the best post-WW II U.S. stand-up comedian/philosopher took this idea too represent U.S.  foreign policy in the 1990s and early 2000s, heavily arming countries like Iraq and then challenging them to a fight and invading them. Richard de Bastion saw the potential opportunity here and wrote a song about it thus reflecting a triple image in the genres of cinema, stand-up comedy and music. It would have been an impossible enormous task for most people, but Richard de Bastion, being the man he was, simply took it in his stride, and quietly made it work, very well indeed. Here is a video of Richard playing this song at Bonn folk club in 2013 on his first visit to us:
"Bully The Kid" written and performed by Richard de Bastion
https://www.youtube.com/watch?v=eVxQ344JLB4
Thanks to Janeiro del Rosario for creating the video back then.
You can deduce from the video how much Richard enjoyed playing in Bonn folk club.
Furthermore, now you know what Dalí's wonderful painting was doing here. It reminds me very much of this song. A work of equal genius.
Eingestellt von John Harrison um 14:49