there is unfortunately not a lot to look forward to at present. Food shopping is of course currently a popular form of entertainment, and if one walks or cycles to the shops it is also a necessary form of exercise.  This involves, however, despite its sense of freedom and glamour and social intercourse and wonderful normalcy, always the latent risk, however minimal when one is masked, of possibly being infected, and indeed even later dying of coronavirus-COVID-19. So there is certainly a delight but also with an intrinsic undeniable risk involved. In a way, it's a bit like the mercurial pistol in a Blues song. It lies almost unnoticed on top of the dresser in every song. It isn't always fired, (is it even loaded?) but it is always there, lurking quietly in the background.

Even on a bicycle, one can, with suitable bicycle baskets and paniers and an eye to COVID-19 exposure risk management, easily do a week's family food shopping on two days of the week and even on one day with prudent use of the food home delivery services which are available. So what would one do on the other five or six days of the week?

Here in Bonn all of the pubs and clubs and restaurants are currently closed, realistically until further notice. One can visit, or be visited by people from other households, but only a maximum of one at any particular time. One can walk with one other person from one other household and meet outdoors, but woe betides if one has revolutionary almost seditious ideas about holding "picnics"  (as I recently read about two ladies from Ashby-de-la-Zouch carrying coffees-to go outside on their walk with them into the adjoining county of Derbyshire! Fines of GBP 200 made it a rather expensive picnic with no food element!) and I have noticed even in Germany along the river Rhine the park benches seem to be rapidly disappearing of late (probably only for normal annual winter revarnishing and refurbishing?)  The banks of the Rhine are long and inviting but due to the recent incessant rain, even some of those are now currently flooded and impassable for normal walkers (perhaps that explains why there are now so few wooden benches? will search parties soon have to be despatched downstream in order to search citizens' cellars in the Netherlands in the vicinity of the river Rhine in order to check if German grandparents` favourite wooden public benches are not surreptitiously stowed away there after initially arriving during a Rhine flood as flotsam and jetsam?

Some five years ago at fellow folk clubber Steve Perry's behest, I became involved in arranging with him a weekly English Conversational course/meeting. I was already involved in sufficient altruism with organising Folk Club Bonn, which is a purely voluntary, not-for-profit organisation, that I wasn't really pining at the time for a similarly lucrative "job" but Steve who was by then already doing a tremendous amount of "work" for the folk club and thus ensuring that I had more free time so that I could not reasonably refuse.  It is something that I have never regretted. We take it in turns to find and work up a topical English language text. Steve normally from The New York Times and I from The Guardian or The Economist and put our own glossaries to it containing words that we think Germans would not necessarily know or maybe possibly trapped by "false friend" words. We used to meet weekly in the bar of the BTHV ( the Bonn hockey and tennis sports club) in Dotty's Bar where the Folk Club Bonn used to meet on the first Friday of each month in what I can only refer to now as "Better Times".  We met physically as long as possible. It seems like sheer lush high pile rich carpet luxury to think that we now met then from five different households, we could have even have met inside then, but voluntarily chose to meet outdoors of our own accord and dear Roland the " Mein Host" at Dotty's Bar even provided us with the luxury of an open log fire outside on the balcony deep into the dark autumn drawing-in nights.

Since last year the weekly English Conversationalist meetings are now convened on Skype and Detlef Staketzki has joined many other folk clubbers in this weekly meeting and convinced us that he is not only exceptionally well qualified to be one of  FCB's notorious German language scribes, but that his comprehension of English is also "Tip-Top". Only late last autumn in 2020 we were restricted in numbers to five or possibly one or two more from the same households, but now as we have been permanently on Skype "the world is literally our oyster"! Steve and I try to point out that we both have the same Queen (Steve is also a Canadian citizen) but also that we are one or two or three countries actually separated, rather than united,  by the same language. (Please do not confront us with the differences between turtles and tortoises!)

I normally throw in the odd poem, but Steve took the biscuit last week with Amanda Gormann's inauguration poem for Joe Biden with her poem "The Hill We Climb" which caused Steve, who was born in the USA to tear-up, as it did me too.

"Welcome back USA, we have dearly missed you over the past four years!"

So what else is available to folk clubbers by way of entertainment in these very difficult times?

Well, funny that you should ask me that because I have just the idea for you to finish off the week before the next one begins. If you are lucky you have home office, which means your rather expensive downtown office is very underutilised, your office plants are crying out unheard for water (unless the porter in your office building is not a "Jobsworth") and you personally are contributing to your work office's savings on light, heating, internet and telephone costs, but safety at work is incalculable!    Right?

There is a free (kostenlos aber nicht umsonst) online concert from both your and our favourite "special guest", Mr Simon Kempston from Edinburgh in Scotland, who was born and raised in Dundee and none the worse for that. Cast him your ear and listen in and enjoy. On Sunday 31.12.20 he did his very first online concert promoting exclusively his very good new CD which you, unfortunately, did NOT hear live in FCB in 2020 "Hand On My Heart" 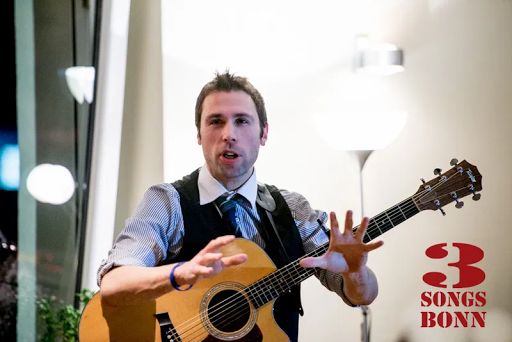 will be playing requested songs from his many previous albums which many of you may well already have, and songs which you should all recognise.

I can sincerely recommend it!

(otherwise, I might bump into you shopping next week!?!  who knows? rumour has it that internet shopping affords amazing social distancing possibilities!)