Our own Elena Giovio put in a sterling evening's altruistic work at the folk club in Dotty's bar last Friday, ensuring that the room was sufficiently and frequently ventilated Thanks for that Elena! This was the first folk club that we have held indoors at Dotty's since March 2020 when corona struck. We had limited admission to only 50 people (on our own account as virtually all government restrictions and recomendations for event organisers seem to have been completely dismantled on the alter of normality)and with 2G certification, as the previous outdoor events had been with 3G certification, but by herding people indoors from the relative safety of outdoors, 2G seemed to be a sensible further precaution for the audience, which surprisingly riled some dedicated anti-vaxxers. Thanks to my E-mail asking people NOT to come if they were in any doutbt at all, only 30 people applied, so it was all the better for that, and all the more cosy too. Thanks to Elena's efforts with the ventilation and the fact that most of the performers indeed chose to play instrumentals rather than to sing songs and with only 30 people, it turned out to be not only a very safe environment but one very rich in musical pleasure. Part of that pleasure was provided by John Hurd himself with one of his own songs which he had been quietly ageing for 40 years, before finally giving it a public airing, and even a Tom Waits song, for which I have never been able to muster sufficient courage to perform. Well done and many thanks John Hurd! You are one of the unsung heroes who keep Bonn Folk Club going and sailing on an even keel through the very difficult waters of 2020 and 2021. 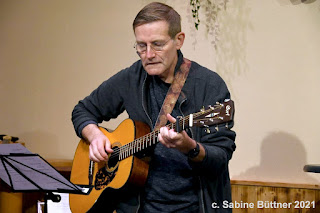 You will find link to John Hurd's 3SongsBonn site https://3songsbonn.com/2021/11/09/back-indoors-for-autumn-folk-club-119/ and be able to read a wonderful report in English of a very wonderful evening which was not easy to organise, but well worth it in the end, for those happy few who attended, and you can see some of John Hurd's wonderful photography too: http://johnno.jalbum.net/Folk%20Club%20Bonn%20Nov%202021/ As I mentioned in the previous post here I did expect and hope a "crowd photo" to be condiderably less crowded than the picture lower down the blog from February 2020, which was featured in the previous post, and so it was. Mario here had room enough to swing a cat in, which has not always been the case at the folk club. 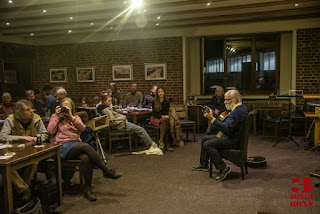 Actually Mario Dompke is one of the truest folk clubbers joining us way back in Graurheindorf. COVID-19 has presented us with many challenges over the last two years. When we have had to adapt to unusual and difficult circumstances Mario was always in the vanguard, accepting adversity with a smile and a wink in his right eye, instead of complaining. He installed the spotlights in the Saal at Dotty's in next to no time and we used those on Friday for the very first time in 20 months! "The only way is for us to play outside?" "No problem, I'll bring my equipment." Playing predominantly "instrumentals" instead of mere "songs" i.e. poetry set to music, rather than the pure musical intrumental prowess that we saw from Werner Krotz-Vogel and Thomas together and seperately from Eva and Uwe earlier in the evening. Some baulked but not Mario, giving us unusually (Mario is a very talented singer/songwriter in his own right, and he normally writes and sings in German, much to Detlef's satisfaction. When asked if he could do 3-4 piecess as instrumentals rather than songs?, he readily agreed, not everyone can do that so readily apparantly. Thanks, for what you do to maintain FCB's survival Matio! ! We ran a limited programme at FCB#119 with predominantly instumentals,so there was actually time to sing Jock Stewart. As we promised earlier we allowed a break of ten minutes at the end for people to vacate the room before we started singing. It was perhaps a tribute to Elena's strict ventilation regime throughout the evening that everyone felt so safe and so not one person left the room, and so after a gap of 20 months the song depicting Scotland's most notorious cattle drover, Jock Stewart, graced these hallowed walls once more! It has become a tradition over the years that all the musicians and singers who have performed at the folk club of an evening, all come to the front and sing and play Jock Stewart together at the end of an evening and it was heartwarming to see this tradition continue once more, after such a long silent time. Here are Eva Henneken, Uwe Jendricke, Thomas Monnerjahn and Werner Krotz-Vogel doing just that: 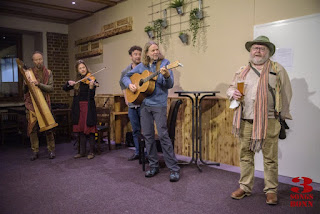 Very good also to see the Folk Club Bonn banner which Barry's daughter Emily produced so many moons ago once more adorning the walls: 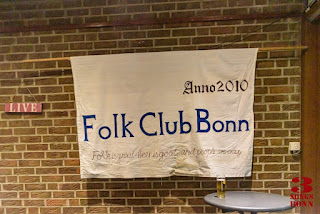 If you do have a couple of minutes do take time to follow the link on 3SongsBonn which John Hurd put up to link to a YouTube video of Jesse Fuller performing San Fransisco Bay Blues, a veritable one man band!
Eingestellt von John Harrison um 02:42