The Ayrshire Bard & The Wee Devil From Dundee

Dear Folk Club friends,
„Some hae meat and canna eat, And some wad eat that want it, But we hae meat and we can eat, And sae the Lord be thankit.“
„The Selkirk Grace“ Robbie Burns
This fellow will not be appearing in Dotty’s on Friday,
his name is Rabbie Burns, who lived from 1759-1796 and is the only dead poet who still 2 1/4 centuries after his death, has people hosting sumptuous dinners all over the world in honour of his memory. Starting with a Scotch Broth and then devouring plates of haggis, tatties, and neeps with copious rations of malt whisky, just in case the boiling water has been insufficient to completely pacify some of the potential pathogens possibly present in some of the numerous ingredients of the haggis. After all, „it’s better to be safe than sorry!“ A Burns Night is typically begun with the host reciting The Selkirk Grace above. 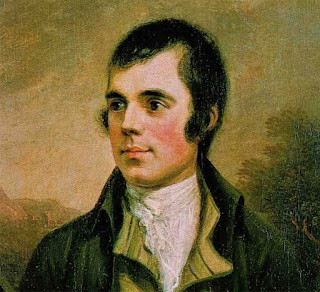 If you’ve not heard of Robbie Burns, the Ayrshire Bard, you will certainly be familiar with some of his work and doubtless, most of you will have sung „Auld Lang Syne“ at midnight on New Year’s Eve to herald in the new year.
So, please don’t be disappointed if Mr. Burns is not present though.
You will, however, be able to meet and enjoy the following gentleman though, and Mr. Simon Kempston, the wee devil of Dundee, is certainly a poet and lyricist and troubadour of similar stock, and Simon Kempston has a bit of history with the good folk in Bonn.
Simon started touring in Europe around a decade ago, just as Bonn folk club also began life, and there began a marriage made in, if not in
heaven, then at least, in Graurheindorf. Simon has played at every Folk Club Bonn in December since then, except in December 2020, when COVID-19 put a stop to his long run. In addition to now touring not just in Europe, but worldwide and notching up 150-200 gigs a year, Simon has also found the time to write and record a new CD each year ever since then.
In August 2021 we were very fortunate to be able to arrange a gig for Simon, thanks to the good offices of Sabine Kühne-Kaiser from KuKug as an integral part of „Music From The British Isles“ in a series of outdoor musical concerts run in collaboration with the Kleines Theater in Bad Godesberg, „Under The Cedar“.
Troubadours have experienced great difficulties due to the lockdowns of most indoor musical events over the last 20 months, and few more so than those musicians emanating from the UK, like Sean Taylor and Simon, who in addition to the usual COVID restrictions have also had to deal with the new Brexit restrictions, like visa restrictions, which are now affecting such musicians when touring in the EU with a vengeance. What was until recently taken for granted for such touring musicians from the UK is now turning into a nightmare on steroids at every turn. John Hurd recently ordered a CD from Roxanne de Bastion to be sent by post direct from the UK to Germany, and ended up being stumped for duty „handling“ charges increasing the original cost of buying the CD by over 50%!
So, with all this in mind, and also to reduce the evening, and thus the physical contact, to a minimum of time we decided to run this December 2021 event, not as a „normal“ folk club (whatever that might be!?!) but as a concert with just Simon Kempston and a hat, so that Simon can earn a modicum of money, to pay for his travelling expenses, especially as some of the gigs in Bavaria and Saxony have been canceled due to further new COVID lockdowns in those states. So do come along and listen and enjoy him and also hopefully lighten the load of CDs which he would otherwise have carry back to Scotland, and they do make wonderful Christmas presents as who knows if the Christmas Markets will remain open all the way until Christmas? Luckily Simon has no board and lodgings to worry about,
as once more Detlef and Ingrid Stachetzki are extending Simon an extended stay with arm hospitality at their home in Graurheindorf.
You will notice from the photo below that Simon has an upright tuft of hair on his forelock over his brow, which seems to be very much reminiscent of the curling sideburns of Robbie Burns in the photo at the top of the page here! 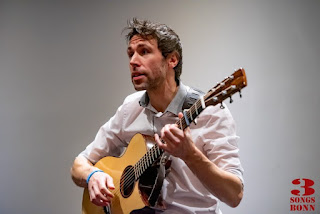 For few of you who may perhaps not be so informed about Simon Kempston here are a couple of links to an interview with Simon conducted by John Hurd of 3SongsBonn:
https://folk-club-bonn.blogspot.com/search?q=Simon+Kempston
https://3songsbonn.com/2020/12/20/simon-kempston-interview/
Now here is an interesting little aside, although Friday will not be a folk club event, but a concert for Simon, there was, and is, a small hangover from a „normal“ folk club. Gert Müller had approached the folk club in November to request if he could contribute a topical Christmas Story auf Bönnsch in December. It was decided, that despite the new „concert“ format, this wish should still nevertheless be granted. No one really knows when the next FCB will be possible, it may be January or it may even be June or July 2022?  A Christmas Story has a certain „sell-by“ date, so we decided that it could and should be allowed in December. One of the physicians on the FCB committee was concerned though, for the best possible reasons, that because Simon has been touring through Germany and because Gert Müller, is due to his age, in a high-risk group for COVID that it would not be advisable for him to come into immediate contact with Simon. I thus called Gert and pointed this out to him, and even offered to voluntarily „Ban“ him in the interests of his own safety, either until the end of COVID or until he had been able to take a trip through a „Jungmühle“ in order to negate this high-risk factor.  To this Gert replied, „I have been vaccinated not once, not twice, but now thrice and I am old enough to make my own decisions.“ He will also be obtaining a negative test certificate before Friday evening. Furthermore, as expected, once I had explained the current difficulties facing UK-based musicians during COVID and the fact that Simon has also become a father for the first time this year, Gert kindly declined any „take“ from the hat, as he is financially settled enough. Thank you Gert.
Simon is indeed by his very nature, a troubadour, a travelling musician, and as such he has been performing every night at events which were either 2G or 2Gplus for the past three weeks, so he has had more tests during that time than most people have had hot dinners.  Going to an event in the 14th or 17th centuries in the Germanic lands when the bubonic plague was rife, where there was no vaccine available whatsoever would have been associated with a risk factor of possibly 50% death. The risk here is probably very much less than being struck by lightning or having a traffic accident on the way home.
Enjoy yourselves and stay safe, and remember, „Life is dangerous in itself, no one has ever yet escaped it alive!“
Eingestellt von John Harrison um 09:29