I have always maintained that it so much easier to wind something down,

than, as in the words of Rudjard Kipling, "to build it up again with worn out tools!"

That is just as true now today as it ever was.

At the end of the evening John Hay kindly thanked me in public for my tenacity in refusing to (figurativly) "lie down in a street for a truck to run me over" with regard to FCB planning in COVID-19 times. Instead, I do admit that I have indeed fought tenaciously for insisting that we DO hold a folk club, whenever it is possible to do so, but ALWAYS in as safe a manner as we could possibly do so. So, as MC, I am invariably the most visible part of the iceberg. Just because I am visible does not mean that I deserve any more credit, as I am really just a wee small guy standing on the shoulders of giants. The loose Folk Club Bonn "Committee" is a judicial non-entity, It's depth and strength of talents (two physicians are on the board as well as a professor and a mechanical engineer, an agricultural engineer a geographer, an economist, a historian, a biologist, people with degrees in both language and literature, and journalism, and a wonderful man, our true professional musician from Louisiana who conceived and erected this very blog here, and could give us each and every one of his music degrees, and still have a couple left over for himself, and we also have a lawyer is on board and the "committee" has a communal responsibility and understanding of the greater meaning of life, which I personally find is second to none. 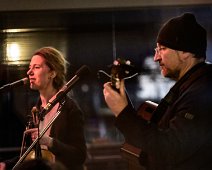 The most wonderful part of this unusual evening was when John Hay said to me personally, ""now John I understand why Folk Club Bonn "inside" is completely unplugged and purely acoustic."" A very rare "Gabriel Oak" smile transgressed my face (read the introduction page to "Far From The Madding Crowd" it that smile means nothing to you!). John Hay has often been someone who has  wished for more amplification and even "loops" to encourage younger people.to come to FCB. I condoned amplification "outside " at Dotty's on the balcony, because there are noises outside which one never has indoors. We were safe despite the increased incidence. I really do look forward to going inside again, where we really do not need amplifcation. 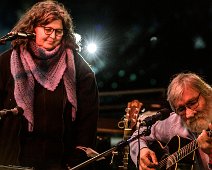 Such is may personal commitment to this very wonderful, not officially existent, "institution" that, as I mentioned to Mario, that for the very first time I had to remember that "I" was on my way with him to FCB # 121 , but for me it was only my FCB  # 120. (For the very first time I missed F.CB # 120 in December.) Thankfully, John Hurd and Sabine Büttner looked after December for me, in my only absence.  Danke schön dafür U2!

John Hurd deserves my particulat thanks as he came to FCB in the very early days in Graurheindorf in The Schützenhaus. He was then the only other person in the room who had ever attended an anglophile "folk club" in the UK and he immediately understood what we intended to do, and not only that , but immediately picked up the baton, that we had also innocuously dropped at his feet, He not only picked up the baton, but ran with it in a wonderful way, and he has also performed in FCB since then, and literally everybody who has ever performed there is indebted to him, both for his prose and his photography and his subsequent  performances.

John Hurd is a wonderful guy and has suffered more than most folk clubbers during the last two years,

in having me continually bouncing a ball against his wall, asking ..... is this possible dear John in your humble opinion?

In times of "trouble and strife!"such opinion helps one, and sometimes, even a folk club to simply! survive! Thanks for your support during the dark days of COVID-19 John Hurd!

A wonderful large "thank you" to everybody who has, and continues to help FCB to survive, and simply do what it does best, offer a large portion of live acoustic music once a month for everyone to enjoy and understand. Plato said that “music is a moral law. It gives soul to the universe, wings to the mind, flight to the imagination, and charm and gaiety to life and to everything”, and we've certainly been missing that recently!