some people have been asking us why we are not holding the "outdoor" folk club in the usual place outside on the hockey pitch, where normally the rugby training is held as we are setting up and trying to do a sound check. Here is the reason, fairly self evident: 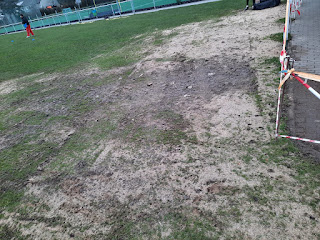 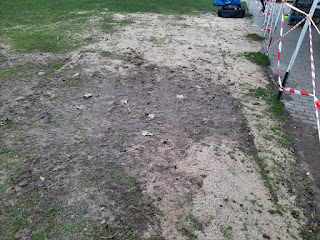 As you can see the area immediately in front of where the "stage" would be is extremely wet and damaged with next to no grass visible at all, and is in the process of being re-seeded. So if we were to hold it here with 50 people and benches and stools it would end up being seriously churned up and take an enormously long time to recover. So we do not wish to upset our Argentine rugby friends, and I can understand the problem, as I used to play rugby myself, and so we will still be outside but on the now mainly roofed balcony outside of Dotty's bar.

There is one game though that is still played in Derbyshire in the town of Ashbourne which vastly predates all other ball games like rugby or soccer. This is called Royal Shrovetide Football and the goals are 3 miles apart. It is played on shrove Tuesday and Ash Wednesday from 14:00 hrs until 22:00 hrs and the Uppards to the north of the river play the "Downards" from the south of the river. There are no limits on the number of players on each side and the only two rules are that it is not allowed to move the ball forward in or on a motorised vehicle and murder is not allowed. Otherwise the ball spends a lot of the time being "hugged" by a mass of men along the river bed. The game was not played in 2021 due to COVID-19 but it is back again this year. It is not uncommon for no goal to be actually scored on any one day, but yesterday the score was

https://www.derbytelegraph.co.uk/news/local-news/live-updates-ashbourne-royal-shrovetide-6731524
If you look at the video in the above link you will get some idea how this game works and how it means so much to the people of Ashbourne who have probably been playing it since the perhaps the twelth century, or at least since they were twelve themselves.
https://www.derbytelegraph.co.uk/news/local-news/live-updates-ashbourne-royal-shrovetide-6731524 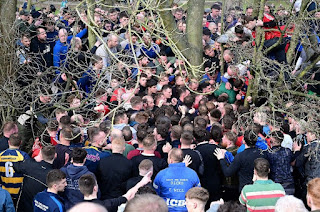 Now that is what I call a loose rook! These lads aren't worried about a bit of water on the ground, they'd just like to know where the ball is?

So in order to look after the pitch down below we shall be enjoying the newly refurbished balcony at Dotty's Bar. As you can see the advantage of a well ventilated area outside along with a covered roof to keep the rain out.On Friday it will be fine but cold, but it's always good to know! 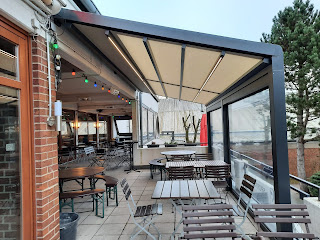 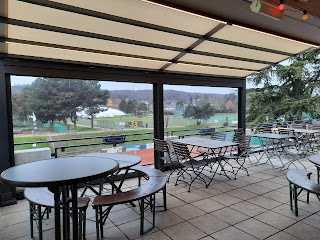 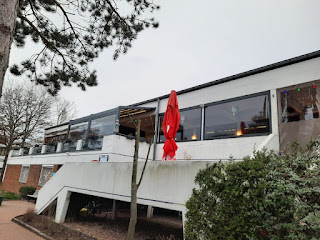 So remember to register yourselves at FCBonnLite at Gmail.com and let us know if you would like to partake of a soup. Should we have to reduce numbers it's first-come-first serve so the early birds really do catch the worms here! Entrance is free so do come and enjoy your evening with some fine music. Looking forward to seeing you on Friday!  Keep folking! Gruß,  John