Die Mauersegler sind wieder da! The swifts have arrived back once again!

Last Saturday I was having dinner al fresco at the Deutschlandreise restaurant in the Paul Kemp Strasse in Bad Godesberg.

https://deutschlandreise-bonn.de/
which I can recommend, and there in the skies above I spotted my first pair of swifts as a sign for the arrival of summer.
Swifts are the last of the migratory birds to arrive in early summer and the first to leave again in early autumn.
They mate for life and return each year to their nesting places and continue flying above our summer skies. Following their maiden flight they only make landfall to nest after having reached sexual maturity in their second or third year. They do literally everything on the wing.
Unlike swallows they cannot land on the ground and fly upwards again. They need a drop of at least three metres in order to get airborne and resume flying. Once the start flying, they fly like no other bird.
>Here is a little poem about the amazing swifts. 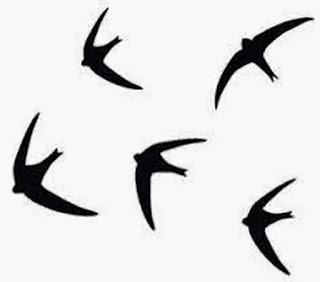 Diving from your bell tower

On your maiden flight

Newton’s apple in your throat

You know your parents love you

But do they have to gloat?

The wind is rushing faster

The ground appearing near

Can this really be so normal?

Suddenly, your lungs are full and

Makes the first few beats upon the wing

Conquers the air and to the sky is born,

No winged insect ever safe

On the Norway to the Cape patrol

At first great fear, now a mere “stroll” on the wing

As your never-ending areal revere

What glee feel you now

Flying for the United Nations

Master o’er all above

The screech-maker wiles and sings

Dicing, slicing through the rooftops

Some say a swift,

Can in the valleys

I say a swift, rounding each and every

Roof top with such eternal glee.

In my rafters be

To nest and seek sojourn

To breed and rest a while

To take breath and breed

Spring into the the air

You are a continuous cacophonous symphony

Knowing you, I know none

You come as last, and leave us early,

Perpetual marker of the seasons

Antipodal friend in the hurly burly

The mountain’s summits are such, yet much lower

But ‘twixt Spring and Summer return in May